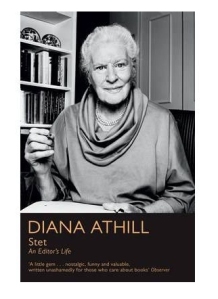 Diana Athill was an influential editor who worked for several publishing houses in London. This memoir covers the 50 years she spent in the industry.

The book is remarkably interesting for far more than its insights into the world of literary publishing. Diana Athill is honest in her descriptions of her relationships with colleagues, competitors and writers. She also drops tantalising hints about her colourful personal life, the details of which are covered, I assume, in some of her other autobiographical books.

The first half of the book is a more-or-less straightforward narrative of her life as an editor. The second half of the book devotes a chapter to each of her more memorable writers, whom she describes with sympathetic but forensic honesty. Some of these writers’ names were unfamiliar to me, having faded into obscurity over time. Others are very well-known: for example, V.S. Naipaul (who she struggled to like as a person) and Jean Rhys, author of the Wide Sargasso Sea, whose fractured personality and chaotic lifestyle are described in such vivid detail that it seems remarkable the woman managed to write anything at all.

What I liked about the book:

Diana begins with a compelling picture of her early life as a young woman during the second world war, But the intimate insights into her domestic life fade away as the years progress. In the latter part she seemed to be hiding behind an obscuring net curtain, only occasionally giving little hints of secret adventures and interesting love affairs. Later, I came to understand she has written several autobiographical books, presumably covering these aspects of her life in more detail, but at the time of reading I couldn’t understand why she was teasing the reader with hints, but not delivering the juicy bits.

The writing flows well, but in places the sentences are convoluted and need to be read a few times in order to make sense of the prose. Given she spent about fifty years working as an editor, and the narrative of her professional life only takes up 128 pages, complicated situations have been compressed into a few sentences.

What I learnt as a writer:

Biographies are fascinating. The most unexpected people live the most surprising lives and there is nothing more weird than the truth.